We have removed the word “bale” from most of the bag sizes, this word seemed to cause too much confusion even with the descriptions of which each size bag held for hay noted. Part of the underlying problem is hay bale sizes vary quite a bit depending on the part of the country the bales were produced.
You will see we use “roughly” and “about” a lot – that’s because hay varies that much when baled due to compaction/type of forage/baler.
The netting varies from mesh size to mesh size & how hard you pull to the netting to measure it. Bags are not measured in the relaxed state.

• Half Bag – Holds about 25 pounds of hay or roughly half of a 2 string bale (kicker type bale) if flakes are loaded flat as shown in photos. Bags are roughly 38” wide x 36” long.  Half Size Hay Bags

• Standard Bag – Holds about 40 pound hay bales (2 string bales that run about 15″ x 18″ x 40″ long) If loaded into the bag as a complete bale (as shown in photos). Bale strings get removed after loading hay into slow feed net.   Standard Hay Bags

•X-Wide half bag (was called 3 String Half Bag) – this is a new addition that is currently make to order, this bag is for folks that want to feed approximately half of the larger 3 string bales or flakes from the monster size rectangle bales or just want that size – these bags are roughly 48” wide x 45” long 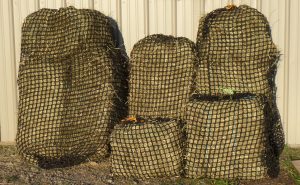 (3 string half bag not shown)

We're currently offline. Send us an email and we'll get back to you, asap.